The Incomparables available for Christmas!

My new book The Incomparables is available in local bookstores, and from the web via Amazon, Indigo and Anvil Press.

And I'm available to do readings from the novel, talks, and interviews. Contact Karen Green of Anvil press - info@anvilpress,com

Read the latest reviews of the book at: 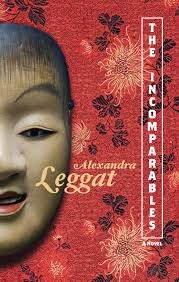 Posted by Alexandra Leggat at 10:34 AM No comments:

Watch for the launch of my new book, The Incomparables , this March.

I had a few things I still wanted to do with the book, which is why it was not released in the Fall. Better to take one's time and be happy with the final result. Looking forward to a Spring Launch!
Posted by Alexandra Leggat at 9:51 AM 1 comment:

This fall, watch for the launch of my new book - The Incomparables.

the poet in me

Was thinking of Hemingway a lot today, his "iceberg theory" write more with less and kept reciting and reciting this poem in my head. I wrote it years ago on a cruise to Havana. Must have been the time spent in Hemingway's home there, the open water and flying fish, Havana and wishing I could still write poetry

it was too much trouble

to keep your head above it

so you dove in and stayed

it's not the lack of air that's strange

how it comforts you

and lures you further down

and when the sun beats through the surface

it's warmer than what you've ever felt from love

it's not absolution - being under

(from my first book This is me since yesterday)

Taddle Creek No. 29 Launch and its 15th Anniversary party


Taddle Creek is 15!It’s true: Taddle Creek is now fifteen years old. Let the celebrations begin! The magazine has all kinds of special things planned for the coming year, but the most exciting surely will be its giant-sized fifteenth anniversary issue and accompanying anniversary party.

Taddle Creek No. 29 launches Thursday, December 6th, at No One Writes to the Colonel, 460 College Street (just west of Bathurst), beginning at 8 p.m. While there will be fun and merriment, there will also be door prizes, not to mention brief readings by the all-star lineup of Tony Burgess, Chris Chambers, Alexandra Leggat, Jessica Westhead, and Zoe Whittall. There’s sure to be some unexpected surprises too.* (*Unexpected surprises not guaranteed.)

Speaking of cheap, here’s a free preview to get you going:

“Dumpling Night,” a new short story by Jessica Westhead; and

A big thank you to everyone who has supported the magazine in any way thus far. Taddle Creek hopes ever so sincerely that you’ll come and help it celebrate on December 6th.

Posted by Alexandra Leggat at 6:14 PM No comments:

Just finished rereading Philip K Dick's Do Android's Dream of Electric Sheep. Amazing how prescient the man was. A great re-read. Noted the significance of the animals a lot more this time around. I don't know why, when the title is what it is, that didn't stick out to me as much the first time I read the book. It was the androids themselves, the Nexus 6, I was taken with initially. During the reread Deckard's obsession with wanting a real animal lured me through. I saw a completely different side to his character. The great thing about rereading great books is you never know, depending on the phase and stage of life you're in, what layer of the work you'll hook into. About to reread Ray Bradbury's Farenheit 451 and the Illustrated Man. Bradbury has always been a big influence, not so much what I write, but how I write - naturally. I'm sorry he's gone.
Posted by Alexandra Leggat at 11:31 AM No comments:

Beauty and the Beast

It's been a busy year, but new work is on the horizon and I'm excited about the prospect of it being read. I have new fiction scheduled to appear in the upcoming issue of Taddle Creek, a short piece of fiction, my most desirable medium, and a new book, my longest story to date, a novel, that is close to the end of the final draft. What I've learned from writing this new book is simple - novels are beasts. I truly don't know why anyone writes them. But the story and the characters I am very fond of and the details. Details I discovered are integral to the beast. Beauty is also integral to the beast. If one can get past the glowering enormity of the form and concentrate on the beauty of the world being created and existing within the form, it becomes less of a laborious task and more of a frightening journey. I am not adverse to frightening journeys - after all what is life? The short story form is my friend. The novel is my obsession, like a lover. I didn't seek it out. I didn't premeditate its existence. I was happy with my friends. It seduced me one day in my car while waiting for a light to change. Wandered into my psyche, latched on and I was stuck. Like a lover I've had to learn what its trying to tell me, what it wants from me, what its all about. Like a lover, I hate it, I love it, I cry over it, I tell it I never want to see it again, then pull it to my chest and embrace it. I dream of it. It keeps me awake. I don't talk to it for days, then we don't stop talking for hours. It makes me smile, cry, manic, hungry, starving, drink, smoke, laugh, reflect and ultimately, I hope, in the end, I will have become a better person from surviving the experience, the relationship we've survived. I hope in the end, at least, I will come out of this a better writer and storyteller. I hope in the end, like all lovers, the next one will be different!
Posted by Alexandra Leggat at 8:55 AM No comments:

Alexandra Leggat
I'm an author, as well as a freelance writer and editor and I instruct creative writing classes at the University of Toronto School of Continuing Studies. My new book entitled The Incomparables has just been published. I am available for freelance writing work, manuscript evaluations, mentoring and workshops.

The Mountie at Niagara Falls by Salvatore Difalco

To inquire about writing and editing services, seminars, workshops and other info